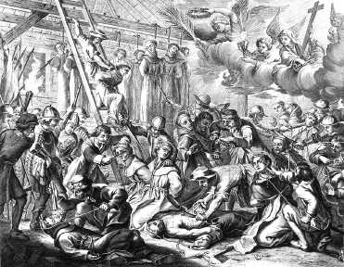 Ss. Nicholas & Comp., Martyrs of Gorkum​
As of 1572, Lutheranism and Calvinism had spread through a great part of Europe. In the Netherlands this was followed by a struggle between the two denominations in which Calvinism was victorious. On 1 April of the next year, Calvinist forces and a rebel group called the Watergeuzen (Sea Beggars) conquered Brielle (Den Briel) and later Vlissingen (Flushing).[2]

In June, Dordrecht and Gorkum fell, and at the latter the rebels captured nine Franciscans: Nicholas Pieck, guardian of Gorkum; Hieronymus of Weert, vicar; Theodorus van der Eem of Amersfoort; Nicasius Janssen of Heeze; Willehad of Denmark; Godefried of Mervel; Antonius of Weert; Antonius of Hoornaer, and Franciscus de Roye of Brussels. To these were added two lay brothers from the same friary, Petrus of Assche and Cornelius of Wijk bij Duurstede. At almost the same time the Calvinists arrested the parish priest of Gorkum, Leonardus Vechel of 's-Hertogenbosch, and his assistant.[2]

Also imprisoned were Godefried van Duynsen of Gorkum, a priest in his native city, and Joannes Lenartz of Oisterwijk, a canon regular from a nearby priory and spiritual director for the monastery of Augustinian nuns in Gorkum. To these fifteen were later added four more companions: Joannes van Hoornaer (alias known as John of Cologne), a Dominican of the Cologne province and parish priest not far from Gorkum, who when apprised of the incarceration of the clergy of Gorkum hastened to the city in order to administer the sacraments to them and was seized and imprisoned with the rest; Jacobus Lacops of Oudenaar, a Norbertine, who became a curate in Monster, South Holland; Adrianus Janssen of Hilvarenbeek, a Premonstratensian canon and at one time parish priest in Monster, who was sent to Brielle with Jacobus Lacops. Last was Andreas Wouters of Heynoord.[2]

The Apotheosis of the Martyrs of Gorkum 1572, print made by Jean-Baptiste Nolin after a painting by Johan Zierneels, 1675
In prison at Gorkum (from 26 June to 6 July 1572), the first 15 prisoners were transferred to Brielle, arriving there on 8 July.[3] On their way to Dordrecht they were exhibited for money to the curious. The following day, William de la Marck, Lord of Lumey, commander of the Gueux de mer, had them interrogated and ordered a disputation. In the meantime, four others arrived. It was demanded of each that he abandon his belief in the Blessed Sacrament and in papal supremacy. All remained firm in their faith. Meanwhile, there came a letter from the Prince of Orange, William the Silent, which enjoined all those in authority to leave priests and religious unmolested. On 9 July, they were hanged in a turfshed.[2]

Veneration
A shrub bearing 19 white flowers is said to have sprung up at the site of the martyrdom. Many miracles have been attributed to the intercession of the Gorkum martyrs, especially the curing of hernias.[3] The beatification of the martyrs took place on 14 November 1675, and their canonization on 29 June 1867.[1][4] They were canonised on the feast of Saints Peter and Paul, as part of the grand celebrations to mark the 1800th anniversary of the martyrdom of Peter and Paul AD67.[5]

For many years the place of their martyrdom in Brielle has been the scene of numerous pilgrimages and processions. The reliquary of their remains is now enshrined in the Church of Saint Nicholas, Brussels, Belgium. 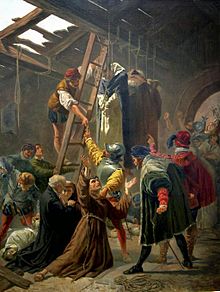 There were 11 Franciscan friars or Minderbroeders (Friars Minor), one Dominican friar or Predikheer, two Norbertine canons regular and a local canon regular, or witheren and five wereldheren (secular clergy). The 19 put to death on 9 July 1572 were:[2][6]