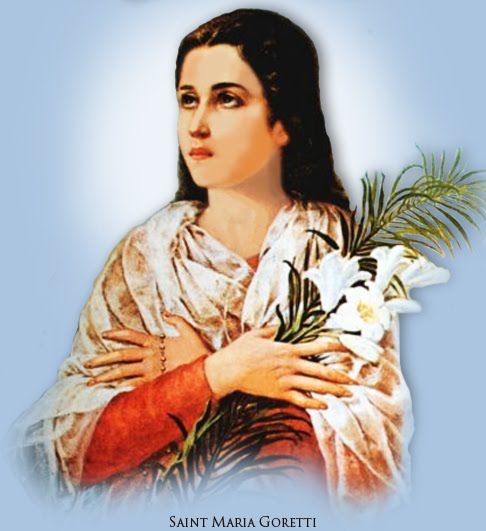 Maria Goretti was born on October 16, 1890, in Coranaldo in the province of Ancona in Italy, the third of seven children of Assunta and Luigi Goretti. When Maria was six, her father, realizing he could not support his growing family on the barren countryside, took them south to a village near Anzio, believing that in the rich, warm farmlands of the Mediterranean he would find a more prosperous living and a make a better life for his family. Luigi was a hard worker, but suffering from malaria, typhus, meningitis and pneumonia, he died in 1900, leaving his family penniless. Maria, now a child of ten, was doing the work of a grown woman.

Maria impressed everyone with her radiant purity. She was naturally pious, kind, and helpful. She was also outstandingly beautiful.

In 1902, at age twelve, Maria was attacked by the 19-year-old farm hand Alessandro Serenelli. He tried to rape her but she resisted and fought back, yelled that it was a sin, and that he would go to hell. Enraged, Alessandro stabbed her fourteen times and left her bleeding and unconscious. She did not die, but was taken to hospital and was operated on for more than two hours. She lived for twenty hours more, received the Last Sacrament, and specifically forgave her murderer. She died holding a crucifix and a medal of Our Lady.

Alessandro was tried and sentenced to thirty years’ in prison with hard labor. For the first seven years or so he maintained a defiant attitude, but he repented, and dreams of Maria herself were largely responsible for his repentance and conversion. In 1908, six years after her death, Maria came to Alessandro in a dream or a vision, so real, it was for him reality. His prison cell was transformed into a beautiful garden filled with fragrant flowers and surprising masses of lilies. A figure in white was gathering the lilies. She turned to him and he cried out: "Maria! Oh, Mariettina!" and she came to him, carrying an armful of white lilies, which she handed to him, one by one, each representing a wound he had inflicted on her. And she repeated her dying wish that one day his soul would reach her in Heaven.

Maria was beatified in 1927. Alessandro was released in 1928; and he and Maria’s mother received Communion side by side on Christmas Day 1937, and they spent Christmas together. Maria was canonized in 1950. Her mother was present at the ceremony, the first time this has ever happened. Some people say that Alessandro was present, too. Eventually, he found peace as a gardener in a Capuchin monastery and as a lay brother of the Secular Third Order. His favorite flower was the lily. He died in 1970.

Maria is a beautiful model of purity, chastity, love and forgiveness for those in our society today -- both young and old. She took to heart the words of the priest who upon reception of her first Holy Communion told her,"A Catholic will always rather die than sin against God." She chose to die rather than to sin, and to become a shining saint of purity. She received strength to die as a martyr for purity through her frequent reception of the sacrament of the Holy Eucharist. She forgave the man who murdered her and helped him repent and turn back to his faith. Impossible, you say? How could anyone forgive someone who committed such a horrible crime? Nothing is impossible with God.

This brief story does not do justice to this great modern day saint. You can find more detailed information here