The Seven Brothers, Martyrs, and St. Felicitas, Their Mother 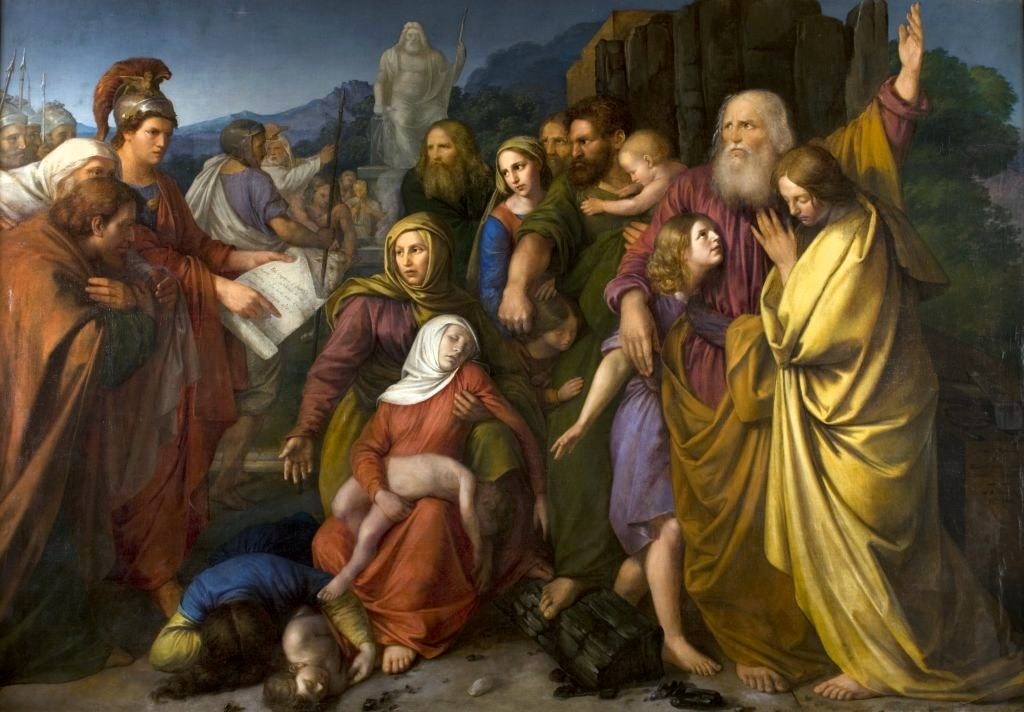 The Seven Brothers, Martyrs, and St. Felicitas, Their Mother​

In the Second Century.

THE ILLUSTRIOUS martyrdom of these saints has been justly celebrated by the holy fathers. It happened at Rome under the emperor Antoninus, that is, according to several ancient copies of the acts, Antoninus Pius.1 The seven brothers were the sons of St. Felicitas, a noble pious Christian widow in Rome, who brought them up in the most perfect sentiments and practice of heroic virtue. After the death of her husband she served God in a state of continency2 and employed herself wholly in prayer, fasting, and works of charity. By the public and edifying example of this lady and her whole family, many idolaters were moved to renounce the worship of their false gods, and to embrace the faith of Christ, which Christians were likewise encouraged by so illustrious a pattern only to profess.

This raised the spleen of the heathenish priests, who complained to the emperor Antoninus that the boldness with which Felicitas publicly practised the Christian religion, drew many from the worship of the immortal gods who were the guardians and protectors of the empire, and that it was a continual insult on them; who, on that account, were extremely offended and angry with the city and whole state. They added, that in order to appease them, it was necessary to compel this lady and her children to sacrifice to them. Antoninus being himself superstitious was prevailed upon by this remonstrance to send an order to Publius the prefect of Rome, to take care that the priests should be satisfied, and the gods appeased in this matter. Publius caused the mother and her sons to be apprehended and brought before him. When this was done he took Felicitas aside, and used the strongest inducements to bring her freely to sacrifice to the gods, that he might not be obliged to proceed with severity against her and her sons; but she returned him this answer: “Do not think to frighten me by threats, or to win me by fair speeches. The spirit of God within me will not suffer me to be overcome by Satan, and will make me victorious over all your assaults.” Publius said in a great rage: “Unhappy woman, is it possible you should think death so desirable as not to permit even your children to live, but force me to destroy them by the most cruel torments?” “My children,” said she, “will live eternally with Christ if they are faithful to him; but must expect eternal death if they sacrifice to idols.”

The next day the prefect, sitting in the square of Mars before his temple, sent for Felicitas and her sons, and addressing his speech to her said: “Take pity on your children, Felicitas; they are in the bloom of youth, and may aspire to the greatest honours and preferments.” The holy mother answered: “Your pity is really impiety, and the compassion to which you exhort me would make me the most cruel of mothers.” Then turning herself towards her children, she said to them: “My sons, look up to heaven where Jesus Christ with his saints expects you. Be faithful in his love, and fight courageously for your souls.” Publius being exasperated at this behaviour, commanded her to be cruelly buffeted, saying: “You are insolent indeed, to give them such advice as this in my presence, in contempt of the orders of our princes.” 1

The judge then called the children to him one after another, and used many artful speeches, mingling promises with threats to induce them to adore the gods. Januarius, the eldest, experienced his assaults the first, but resolutely answered him: “You advise me to do a thing that is very foolish, and contrary to all reason; but I confide in my Lord Jesus Christ, that he will preserve me from such an impiety.” Publius ordered him to be stripped and cruelly scourged, after which he sent him back to prison. Felix, the second brother, was called next, and commanded to sacrifice. But the generous youth replied: “There is one only God. To him we offer the sacrifice of our hearts. We will never forsake the love which we owe to Jesus Christ. Employ all your artifices; exhaust all inventions of cruelty; you will never be able to overcome our faith.” The other brothers made their answers separately, that they feared not a passing death, but everlasting torments; and that having before their eyes the immortal recompenses of the just, they despised the threats of men. Martialis, who spoke last, said: “All who do not confess Christ to be the true God, shall be cast into eternal flames.”3 The brothers, after being whipped, were remanded to prison, and the prefect, despairing to be able ever to overcome their resolution, laid the whole process before the emperor. Antoninus having read the interrogatory, gave an order that they should be sent to different judges, and be condemned to different deaths. Januarius was scourged to death with whips loaded with plummets of lead.

The two next, Felix and Philip, were beaten with clubs till they expired. Sylvanus, the fourth, was thrown headlong down a steep precipice. The three youngest, Alexander, Vitalis, and Martialis, were beheaded, and the same sentence was executed upon the mother four months after. St. Felicitas is commemorated in the Roman Martyrology on the 23d of November; the sons on the 10th of July, on which day their festival is marked in the old Roman Calendar, published by Bucherius.4 2

St. Gregory the Great delivered his third homily on the Gospels, on the festival of St. Felicitas, in the church built over her tomb on the Salarian road. In this discourse he says, that this saint “having seven children was as much afraid of leaving them behind her on earth, as other mothers are of surviving theirs. She was more than a martyr, for seeing her seven dear children martyred before her eyes, she was in some sort a martyr in each of them. She was the eighth in the order of time, but was from the first to the last in pain, and began her martyrdom in the eldest, which she only finished in her own death. She received a crown not only for herself, but likewise for all her children. Seeing them in torments she remained constant, feeling their pains by nature as their mother, but rejoicing for them in her heart by hope.”

The same father takes notice how weak faith is in us: in her it was victorious over flesh and blood; but in us is not able to check the sallies of our passions, or wean our hearts from a wicked and deceitful world. “Let us be covered with shame and confusion,” says he, “that we should fall so far short of the virtue of this martyr, and should suffer our passions still to triumph over faith in our hearts. Often one word spoken against us disturbs our minds; at the least blast of contradiction we are discouraged or provoked; but neither torments nor death were able to shake her courageous soul. We weep without ceasing when God requires of us the children he hath lent us; and she bewailed her children when they did not die for Christ, and rejoiced when she saw them die.” What afflictions do parents daily meet with from the disorders into which their children fall through their own bad example or neglect! Let them imitate the earnestness of St. Felicitas in forming to perfect virtue the tender souls which God hath committed to their charge, and with this saint they will have the greatest of all comforts in them; and will by his grace count as many saints in their family as they are blessed with children. 3

Note 1. Ceillier and some others think this emperor to have been M. Aurelius Antoninus Philosophus, who was a persecutor, and reigned with Lucius Verus; the latter was absent from Rome in the Parthian war, from 162 to 166; on which account, say these authors, he did not appear in this trial. See Tillemont, t. 2, p. 326. But that these martyrs suffered under Antoninus Pius, in the thirteenth year of his reign, of Christ 150, we are assured by an old inscription in several ancient MS. copies of their acts mentioned by Ruinart. That this emperor put several Christians to death whilst he was governor of Asia, before his accession to the empire, Tertullian testifies, (ad Scapul.) And that towards the end of his reign, notwithstanding his former mildness towards them, he again exercised the sword and torments on them, we have an undoubted proof in the genuine epitaph of St. Alexander, martyr, produced by Arringhi, Diss. 2, l. 3, c. 22. See Berti in Sæc. 2. [back]